A ceremony was held at Chichester cemetery on 1st September to unveil a memorial stone to Henryk Zygalski, one of the most famous Polish codebreakers of WWII. It was attended by the Ambassador of the Republic of Poland, Dr Arkady Rzegocki, the Mayor of Chichester, Mr Martyn Bell, members of Zygalski’s family and Sir Dermot Turing. 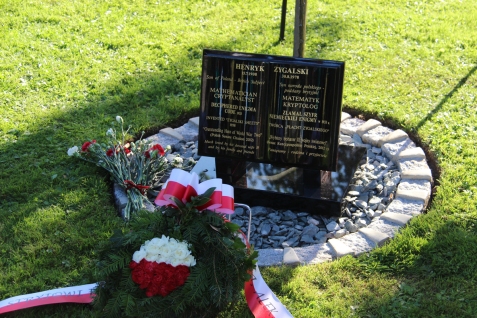 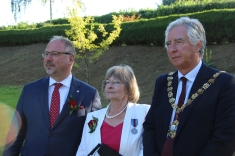 It was also on this day that The History Press published ‘X,Y & Z: The Real story of How Enigma Was Broken’ in which Dermot Turing tells the story of the crucial role played by the Polish codebreakers in laying the foundation for the successes of Bletchley Park during WWII.

It was as far back as 1932 that the Polish codebreakers had used mathematics to find the solution to Enigma. They developed both manual methods (including Zygalski’s sheets) and mechanical methods with machines called ‘bombas’ to find the settings on the Enigma machine. Just before the start of WWII they shared all their secret work with intelligence officers from France and England, giving Bletchley Park and Alan Turing a significant head-start in building the bombe and cracking the codes of the more sophisticated Enigma machines in use by the Germans during WWII.

Henryk Zygalski settled in Britain, lecturing in mathematics at what has since become the University of Surrey. Whilst the contribution of the Polish codebreakers is well known in Poland, it is only recently that their story has been told in the UK and they are beginning to receive the recognition they so truly deserve.

'Strips away the encrusted hagiography that has developed around Alan Turing in recent years … a passionate argument for the lessons we should draw from his life and his extraordinary scientific achievements.' Robert Hannigan, Former Director of GCHQ. April 2021

'Fascinating and highly readable... My wife Rohini and I feel particularly grateful to have a special link to [Alan Turing] through our house in Coonoor .... where Alan's mother lived for many years.' Nanden Nilekani,Chairman and Co-Founder of Infosys. April 2021

'Essential reading for anyone who thinks they know the history of Alan Turing ... a significant reappraisal of his meaning for us today.' Dr Tilly Blyth, Head of Collections, Science Museum. April 2021

'Dermot Turing has written a great book filling out our picture of Second World War code-breaking. His prose crackles with energy and an appealing sense of humor, enhanced by dozens of photographs, many of which will be new even to devoted students of his subject.' Jonathan Beard, Michigan War Studies Review, November 2019

'The anecdotes flow as Dermot warms to his theme. ‘Prof’ really is a cracking read and no engineer’s library is complete without it on their shelves.' Nick Smith, Engineering and Technology, November 2015

'For anyone seeking a more nuanced picture of the human side of Turing, however, this book makes a useful and sometimes poignant contribution.' Clare Mulley, History Today, February 2016